Reba is so thankful that God led her to St Richard Church! She was raised in the Canton, Ohio area in a home with a musical atmosphere; her oldest brother was already an accomplished pianist by the time she was born. She was playing the piano long before she knew how to read music or the theory behind it. She has been groomed with 12 years of classical piano training, and later in life learned to also play using chord symbols. She had her first paid position at the age of 12 as the pianist at a neighborhood church.
Through the years, she has had a variety of music positions at several different denominations. She started subbing at a Catholic Church about 20 years ago for her brother who was the music minister, and that is where she learned to appreciate and love the Catholic Church! Reba has been involved in orchestras, bands, choirs and everything in between.
Reba currently resides in Wauseon, and has 4 adult children and 4 grandchildren. Her hobbies include interior design, food and nutrition, bike riding, road tripping, crafting, and thrift store shopping. 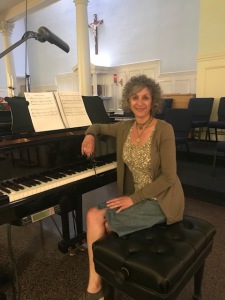